Big Announcements from The BIG Kickoff!

The countdown to United Way of Central Indiana’s 100th birthday is officially on! What better way to start this exciting chapter than with The BIG Kickoff? Thanks in part to the Indianapolis Colts, we celebrated in style with music by The Doo, delicious food and a variety of fun activities. We even had some superheroes stop by!

Hundreds of people mingled on Monument Circle to enjoy the festivities and learn more about United Way and our partner agencies. It was a day of celebrating not only the big 100, but the spirit of volunteering and giving back that lives within Central Indiana.

More than 50 of our partner agencies joined us to celebrate this huge milestone. Nine of those agencies have been our partners since the very beginning in 1918: Boys and Girls Clubs of Indianapolis, Catholic Charities Indianapolis, Children’s Bureau, Inc., Early Learning Indiana, Boy Scouts of America, Families First, Girl Scouts of America, The Salvation Army, and YMCA of Greater Indianapolis. It was very special to celebrate the big event with these remarkable agencies.

Superheroes were also in attendance during The BIG Kickoff as part of the launch of 100 Heroes. Wonder Woman, The Flash, Spiderman and many others were on the lookout for the real heroes of Central Indiana. Know someone who deserves the title of hero? Nominate them to be a part of 100 Heroes!

Halfway through the day, our Emcee and IndyCar Driver James Hinchcliffe, United Way Community Engagement Co-Chairs Mark Miles and Allison Melangton, Colts Sr. Director of Marketing Stephanie Pemberton and United Way President and CEO Ann Murtlow shared how attendees can join the fight for the education, financial stability, health and basic needs of every person in our community. And one lucky guest won two tickets to the Colts Home Opener!

Just because The BIG Kickoff is over doesn’t mean you can’t be a winner too. Anyone who donates $10 to United Way from September 1 – November 30, 2017 will be entered in a raffle to win an all-expense paid trip to the Super Bowl, courtesy of the Indianapolis Colts. If going to the Super Bowl is on your bucket list, make your donation now for your chance to win!

We’re thankful for all the sponsors, partners, and volunteers who made this celebration a success. A big shout-out to the Indianapolis Colts for helping us pull off another great kickoff! We are very appreciative to have the support of Central Indiana and look forward to celebrating our 100th birthday on April 22, 2018. We hope you are along for the ride for the rest of the year! 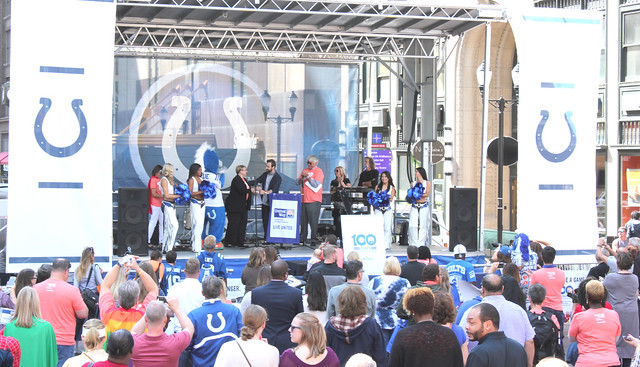